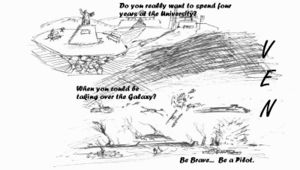 Our idea of advertising...

Welcome to Flight School (FS), the most important phase of Basic Training (BT) for pilots-in-training. If you want to serve as a junior capital ship bridge crewer, instead of a starfighter pilot, please return to the page for Basic Training, and click on the link for Command School.

This introductory Academy course is designed to help new recruits both IC (as TIE-pilots and new members of the Imperial Navy), and OOC (as writers and new members of this club). Over the course of their studies, recruits will learn the basics of aero-space combat and the TIE-series of starfighters, as well as how to develop their character in basic story posts, and how to belong to an active squadron in the VE. Upon completion of Flight School, active recruits will be placed in an active squadron, where they can start putting their new-found knowledge to work.

This course has several phases, called Chapters, each of which tries to bring the pilot one step closer to active duty. Flight School generally takes a few days, and while we recommend that you complete the course in a timely manner, there is no rush. VENA is fairly flexible concerning Basic Training and we'll do our best to accommodate any new member who shows interest. Upon completion of Flight School, new pilots usually get placed into a squadron within a few days.

PLEASE NOTE: Should you 'go AWOL,' by disappearing or otherwise neglecting your training without first notifying a member of staff, you will eventually be expelled from the Academy.

So, without any further ado, here are the Chapters of Flight School:

Chapter I: The Character

Stories aren't stories without a plot, and plots are driven by characters - which is where you come in. The Vast Empire is a literary rpg - we role-play as a primary player-character (PC, for short), by writing stories in collaboration with other members, mostly from the point of view of our PC. Now, as a member of the VEN your PC will begin his/her career as a TIE pilot by default. But he/she wasn't born in a flight suit: his or her background, personality, look and style, and other defining characteristics are totally up to you to define. Creating an interesting character will make for interesting stories, so let's get creative!

As we've said, the Vast Empire is a text-based role-playing environment. Since your PC is a pilot in the Navy, this means you will be doing a lot of 'role-playing' from a starfighter cockpit. In this chapter you will learn some basic information about the vehicles and equipment used regularly by the Vast Empire's Navy, and some conventions that make for a good story post. The goal of this course, and especially of this Chapter, is to supply you with enough basic information to ensure you can write a basic post, and enough detail to allow you to write more elaborate and extensive posts as times goes on. This chapter is focused above all else on making your writing - as a Pilot - believable.

For the final Chapter of Flight School, we're going to broaden your focus. Whereas previous Chapters have concerned you and your character, Chapter III concerns your first active-duty position, as a member of a squadron. Squadrons work together: members work with their fellow members, as writers of collaboratively-told stories (OOC), and as pilot-characters in those same stories (IC). This Chapter is an essential guide for new Naval personnel: it'll tell you what you're expected to do, once you graduate, so that you're an asset to your assigned squadron. Once you have passed this chapter you may move on to the final test.

The following link is provided for the convenience of Flight Leaders only; new recruits should ignore it.