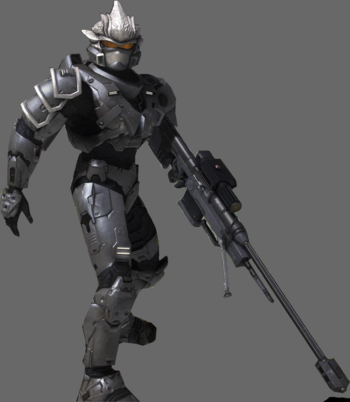 Since the concept of war was formed and executed, three things have established victory: Numbers, Strategy, and Technology. As technology has recently plateaued with the use of blasters, numbers were empahsized. In the Clone Wars, huge numbers of droids and clones were unleashed upon each other, with devastating effect. Here, with numbers even, the last key was strategy. On an individual level, clones were better at strategy, being able to adapt to changing conditions, while droids had only one directive and simple protocols programmed.

In the more recent conflict the Galactic Empire and the (as it was known at the time) Rebel Alliance, centered around one key blueprint and, later, device. The Death Star. We will not dicuss the morality of it, only the impact it had along the war. In general, the Rebel Alliance was sorely outnumbered by the Galactic Empire, but the Rebels used an interesting tactic, one later replicated by the Empire in the attack on Hoth. The rebels would commit an overwhelming (though underwhelming if viewed in the system or galactic scope, but confine the frame of reference to a single installation) amount of force on one objective. In the battle of the first Death Star, the rebels unleashed their forces at a small two meter gap. Though the rebels suffered heavy casulties, they achieved tactical superiority at the last moment and achieved their objective. In the second Death Star, numbers were heavily against the rebels. Even tactics were against the Rebel Alliance as it had been cleverly pulled into a trap. Yet the Rebels (with indigenous support) commited an overwhelming numbers against the shield generator protecting the second Death Star. As they achieved that objective, the Death Star became vulnerable, and commited an overwhelming numbers of starfighters to inside the second Death Star. In parrallel with this, the Rebels commited a significant force against the SSD Executor. When both of these fell, it was inevitable that an all-out attack on the rest of the Imperial Fleet, coupled with confusion, would insure a Rebel victory.

In a slightly related conflict, the Battle of Hoth, unlike the Clone Wars (where strategy triumphed) and the Death Star (where numbers prevailed), was where technology was the initial deciding factor. The deployed AT-ATs proved impossible to take down, except to a very unothodox, costly, and eventually ineffective strategy. The AT-ATs held superior firepower and superior armor, giving them the aura of invincibility.

The Nomad Project was formed by Integral Technologies (under contract to the Vast Empire) to create a human "AT-AT". It would create an armor suit and corresponding weapon and gear to enable a one man destruction machine that can be inserted deep behind enemy lines and wreak havoc.

In this development phase, only snipers have been recruited as they are the only ones who can so far understand and adapt to this method of warfare without extensive (and possibly fatal) training.

The Armor, Gear, and Weapon[edit]

The Self-Contained Mobile Weapons Armor. Nicknamed the SCUBA by the technicians (Self-Contained Utterly Badass Armor), this is the most crucial part part of the Nomad Project. It was decided to incorporate a trademark look which would leave fear in an enemy's heart, if they caught sight of the armor... and survived.

The exoskeleton approximately doubles strength, allowing the wearer to have an edge should it be necessary to engage in melee combat.

The armor also has a two close-range weapons for self-protection. The first is a flamethrower, which, although can only create small bursts, can raise temperature to roughly 200 degrees Celsius. The second is a collapsible blade sheathed on the outside of the right forearm. It folds neatly into the armor when not in use, but can create a meter long blade when full un-sheathed and expanded.

The Sniper Experimental 92 is based off the Verpine Shatter gun designs, in the fact that it uses magnetic fields to launch projectiles. Yet it has been cheapened because it requires the SCMWA to provide the power, and therefore does not require the exceptionally small and powerful (and expensive) power cells. While classified internally as a anti-personnel sniper rifle, it more comparable to an anti-material rifle.

The weapon is extremely accurate, a trademark of having zero recoil. It can also be loaded with special explosive rounds, if needed.

The normal round for the SX92 is the 9 x 16mm Regular round. It is indistinguishable from normal rounds, except its unique size and that it contains no firing powder, making it unable to be fired if it accidentally falls into the wrong hands.

The 9 x 16mm High Explosive is a special round, used to take out vehicles and heavily armored targets. This round is more like a normal round, in that it has firing powder. The entire shell is hollowed out and filled to the brim with a highly explosive powder, which explodes with either a spark or under high compression (eg. When it hits a target). Should a gun attempt to fire this as a normal round, the gun would explode, killing the bearer. A Nomad will only carry a few of these on a mission, saving them for the most special of occasions.

Virtual Intelligence, version 9302 is one of the key parts to the Nomad Project. It manages the virtual interface for the SCMWA's HUD. It can be used to track targets in addition to tracking incoming damage and power output and providing a visual indicator of where a shot will go with a very small margin of error without requiring a scope. While sometimes it could be confused with a true Artificial Intelligence, it is nothing like that. It is nothing more than an extremely sophisticated program with voice ability. This sophistication has a price, though. It is extremely hard to upgrade on the field, even for a trained computer expert. Therefore, if it is necessary to upgrade this software, the changes are attached to a encrypted executable file. This executable file is then transmitted to the suit, wirelessly.

This is a jumpsuit that it is worn under the SCMWA. Though it is dependent upon the VI:9302 so that the user can manipulate it, it gives an edge to a Nomad within an urban setting. The suit is made of two layers. One layer that is a repulsor that is activated when a current is run through it; the other layer is a weak omni-direction tractor beam. Used in conjunction, this allows a Nomad to jump from and to any object in short bursts. This suit draws power from the SCMWA's tremendous reactor in order to power both of its layers.

This is the most expensive part of a Nomad's arsenal, but its rewards far outweight its price. The Hibridium cloak renders the Nomad completely invisible, but the Nomad is left blind and deaf to the rest of the world. The Nomad is left entirely dependent on what the VI:9302 had recorded before it was cut off. Even then, the Nomad could be exposed by running into a recently shifted equipment, vehicle, or even personnel. A Nomad must weigh both the risks and rewards before using this device. If the Nomad is able to re-locate using this device, the Nomad has a completely-unanticipated edge of surprise. Again, as with all of the Nomad's equipment, it is forced to rely on the SCMWA to provide the tremendous power it requires.