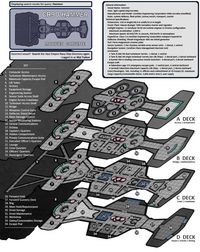 A diagram of the Defiance's deck layout, with a complete list of her technical specifications.
The Defiance is a modified CR90 corvette, in service with the Vast Empire's Navy. Taking advantage of the Corellian Engineering Corporation's completely modular design, the Imperial Navy has made several changes to the vessel, significantly increasing its combat capabilities and drastically altering its internal layout. Most notably, the Vast Empire has installed two batteries of concussion missile launchers atop the ship's dorsal superstructure, and added a state-of-the-art communications/sensor package to enable the Defiance to operate independently of the main Imperial Fleet, as a commerce raider or deep-space training platform. In addition to the ship's complement of 165 (which includes 20 marines, used to maintain security and repel boarders, and 11 command-level officers), the Defiance can transport up to 35 passengers.

The CR90 known as the Defiance was only recently acquired by the Vast Empire, during the battle for the Belgaroth Shipyards. Wyl Trykon was the first Imperial commanding officer the Defiance ever had.

First, the Defiance fought against the Coveway pirates.

Then, the ship was involved in the Second Battle of Belgaroth, where VENI personnel used the ship's advanced communications suite to hack into enemy communications systems, remotely "hijacking" them and misdirecting them, contributing directly to the VE victory.

After the re-assignment of Wyl Trykon, the Defiance spent some time getting overhauled at Belgaroth Shipyards. Following this, the ship was given a new crew and placed under the command of Pherik Zail, who took it on a shakedown cruise. After a few minor skirmishes in the ship, however, Zail was swiftly transferred, leaving command of the Defiance vacant.

The most recent action the Defiance as seen, was at the Battle of the Sollamens, against the Imperial Dominion's remaining forces. The Defiance was under the command of Mike Flynn (NPC).

The Defiance runs on a rotating shift schedule of three watches (each watch lasts eight standard hours), with the entire crew reporting to duty stations during General Quarters. The only senior officer not on a specific watch schedule is the ship's Chief Medical Officer, who is on-call and available for consultation at all times, but only has an assigned duty station during General Quarters. The Watch Rotation is as follows: