Amram is a typical Falleen reptilian humanoid. He stands at exactly six feet tall and while he was muscular he was not bulky relying more on a sinewy tight fast twitch muscles for incredibly fast and precise attacks. His scales are a deep forest green that transitions to a bright orange at the edge of individual scales especially around the neck, forearms and shins. His eyes are a deep red color with black pupils he has no ears to frame his face or facial hair to speak of but more of a subtly darker colored set of scales where the eye brows should be. His hair is raven black and kept in a traditional "topknot" hair style with the exception that it is tied up into a chonmage (samurai bun) when wearing a helmet. When not wearing a uniform Mako wears hessian boots, dress pants with a leather belt and segmented buckle, a long sleeve shirt with a wine colored vest.

Amram could be seen as a cold and calculating creature and for the most part he is but that is due to his up bringing and physiological traits. He is also a lecherous hump under the veneer of cold observation. He enjoys close combat rather than ranged and he is annoyed by sloppy individuals. He is by no means sadistic or cruel he understands the effect of such methods and will employ them when they can best serve him.

Like any Falleen Amram is an ambitious individual and tends to look to the future while keeping him self rooted in the present. In combat he works to be efficient using a economy of motion, tactics and body mechanics rather than pure brute force.

Amram was one of many individuals on Falleen called a noble a lord. A lord among many lords, nobles and lieges, in short he was little better than a commoner on a planet that prided it self on it's noble station. On Falleen Amram would not get any where and most likely if one was being honest with them selves his station would fall. It was time to make a decision in his life if he was to fulfill any ambition that he might have it would not be in the intrigue of the world of Falleen. Not at this current juncture at any rate. How ever with the ultimate chaos that was now the standard for the Galaxy as a whole there was a need for skilled soldiers. Amram decided to ignore his pursuit of political station and apply to the one of the many factions of the splintered Empire. The conditions of the Galaxy being perfect for practically no-name to gain influence. The final question was which faction? The Imperial Hand seemed to have less xenophobic tendencies having the what amounted to the head of state being an alien. Too big he'd be a face in the crowd better not. The Vast Empire how ever would just about the right size for him to offer his services. Thus taking a few possessions he left Falleen for now to serve in The Vast Empire. 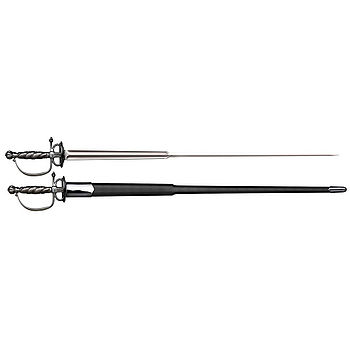 Vibro Foil: A type of melee vibroweapon, similar in principle to a vibroblade, but with a longer and thinner blade. It was well-balanced and completely silent due to a special design that diminished the ultrasonic pitch other vibroweapons have.