Trimic Dyr'Jin, only son of Lance and Reynalda Dyr'Jin. Born on Naboo on 20 BBY. On other calenders it was year 15 after the Great ReSynchronization and year 980 after the Ruusan Reformation. Studied at an early age to be a pilot, took his first flight when he was ten.

Took his first solo at fifteen, at twenty five he was offered a job as a test pilot. At the age of twenty seven he was involved in a crash that left him nearly dead for many years. A few months back he joined the Imperial Navy, and now flies with the 153rd Vast Imperial Fighter Squadron Regents.

Pilot in the Imperial Navy

Driven by the need to prove himself, to whom he has never mentioned. He feels the ghosts of his ancestors looking down at his every action. He knows the history his family name carries deep within it. He knows the heroism in which past generations of his family fought and died with.

He flies as best as he can, always pushing the limits in the craft he pilots. He searches for that one perfect moment when man and machine become one and anything is possible. Where the lines between what is real and what is not blur, and they become one organism. Where they can transcend the spacial limits set upon the Galaxy and soar like birds.

To be truly free, for one moment.

Trimic DyrJin was born on Naboo, thirty standard years past. It was said that at the one minute mark of his birth they knew he would someday be a flier. At the age of ten he took his first flight, the instructor sitting in the other seat was nervous. Though once the plane leveled out everything went smoothly. At the age of fifteen he took his first solo flight, he felt at that moment the plane become a part of him. He was able to tell what she wanted to do, and what needed to be done to have her truly soar.

He received full marks and two commendations, something that had not been done in many years. At the age of twenty he had logged thousands of flight hours, in a multitude of aircraft. When he reached the age of twenty five he was offered a job as a test pilot. He had always believed he was a bird, just born in the wrong body, so he took the offer without even thinking about it.

A horrible crash at the age of twenty seven left him in a coma for six months. It has taken him every moment of every day since then to learn once more how to ride the back of the wind. 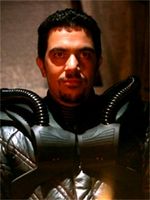 Scral in his younger days as a test pilot.

When he was twenty five his skill with any aircraft had reached the ears of Lor Yyitr. Commander Lor was a legend in the Naboo air community. It was an honor to even look at him, much more to be offered a position as one of his test pilots. He continued to fly with few mishaps until one fateful day when he was twenty seven.

Flying a heavily modified Porax-38 starfighter, he lost control two minutes into the flight and plunged into the icy depths of the Paonga Sea. He was clinically brain dead for nearly thirty minutes before a group composed of Gungans and humans rescued him from the damaged ship. His rehabilitation has been slow.

The ship had been modified to be strictly used in a planets atmosphere, instead of purchasing a ship that had been designed specifically for this task, the owner had converted the P-38.

He never sought compensation for the crash, or his injuries. He loved flying the ship, even if it was only for two minutes.