Grent "Gurlanin" Notimo, is a TIE Hunter pilot, and the CO of Strill Squadron. He likes to think himself as the squadron sniper, and has a devil-may-care attitude, often taking risks when flying. He does, however, always get the job done. He is rarely seen without his pet strill, called Tracyn, the Mando'a word for 'fire'.

Grent was a 5ft 9" human. Years of physical training had given him a fairly muscular form. Coupled with his naturally broad shoulders, it gave him an intimidating look. He displayed qualities of agility. His brown eyes were constantly scanning around, looking for exits and possible threats. He also had one scar, stretching from the top of his right eye to the bottom, a result of a run-in with a local gang's fighting animal. He has short, military cut, dark brown hair, with a well trimmed, and well kept, short box beard.

Grent tended to make a few close friends, be friendly with everyone else, then stay in the shadows. He concentrated on his task, and tried to do his best at it. He smoked deathsticks on occasion, and only drank when he was at a social event, though he never got drunk. He respected other people, and their things, so long as they respected him. He did have a habit of doing pranks on some people, but only if he knew that they would take it well. He struggled with social skills, having undiagnosed Autism. The same Autism also caused him to process things much faster than most of his peers, causing him to appear cockier and arrogant on the, not so rare, occasion that he was able to survive training simulations more often, and beat the rest at logical tests and exams. No matter where he went, Grent would be followed by Tracyn, his pet strill.

Grent was born on Qiilura, home of the Gurlanin species. His parents were poor Mandalorian farmers who's parents had immigrated. Grent was forced to work hard to survive. He had a few friends, and the group of them were the toughest group in the slums, called the Diggers, taking on more experienced adult gangs. His best friend was a Gurlanin called Iaened. The pair were inseparable throughout Grent's life on Qiilura. Mostly, however, Grent dreamed of escaping his poor life and doing something more.
His chance came when Imperial TIE fighters did a flyby whilst searching for a criminal. As well as being impressed by the discipline of the pilots, the TIE fighters, and the subsequent urge to fly in one, Grent, as well as most of the others in the slums, knew where the criminal was. So he turned him in. In return, the station commander took him on as an informant. He was paid for information regarding to local criminals. His was given the codename 'Gurlanin'. The name stuck, so he took it on as his callsign, in later years.
Grent used his payment to buy a T-16 Skyhopper, to fulfil his dream of becoming a Naval Pilot by getting as much practise beforehand as possible. When he wasn't finding out information, he was flying his T-16. Evasive manoeuvres and target practise were amongst some of the daily routines Grent put himself through. He gained a reputation as a maverick, but was able to deliver supplies to some of the more remote and inaccessible locations of the planet.
Eventually, when he was old enough, and felt he was ready, Grent sold his T-16 and bought a one way ticket to the Vast Empire Naval Academy, along with recommendation papers from the station commander. He had chosen the VE, because he liked the discipline, and co-ordination of the Empire. He also wanted a command of his own one day, and knew that this was the best way to get it. The only other option was the criminal underworld, and he had left that world behind.


Or, at least, that's what appears in his official VE personnel files...

In actual fact, most of Gur's backstory is a carefully written weave of lies, with enough truth to it to make it seem legitimate. His real identity is that of an assassin, belonging to the secretive Ozunu Aliit. He was raised from birth to be an assassin, with unswerving loyalty to Mand'alor and the rest of the Mando'ade. It is unknown how many people Grent has killed, or if Grent is even his real name. One thing that is known for certain, however, is that if his secret is ever found out, the Mandalorian is going to have to decide where his loyalties lie: with the vode of Ozunu Aliit, or with his new home and friends in the Vast Empire.

Upon his introduction to Strill squadron, Grent soon managed to gain permission to use the helmet from a set of Katarn armour, so long as he purchased the armour separately and from his own personal bank balance. The main reason Grent wanted to wear the helmet, was because of its distinguishing 'T-visor', which reminded him of his Mandalorian heritage. It also provided a much better tactical readout on the HUD, than a regular flight helmet. Unbeknown to Grent when he gained permission to wear the unique helmet, was the fact that Strill pilots usually wear black Storm Commando armour into battle, as it allows the wearer to still access the cockpit, but also fight on the ground when needed. As such, at times, he has been informed that he may be required to change helmets to the standard issue helmet.

That day has not yet come.

Grent is also permitted to carry the DC-17m interchangeable weapons system. This rifle is a formidable weapon in the right hands, of which Grent's hands are. By itself, the rifle is powerful, with a fairly large clip. However, it can have around three different attachments, the two main ones being the sniper rifle attachment, and the other being the anti-armour attachment. Grent always carries the sniper rifle attachment with him, as sniping is one of his favourite hobbies. If he could carry a full size rifle in the cockpit, he would. 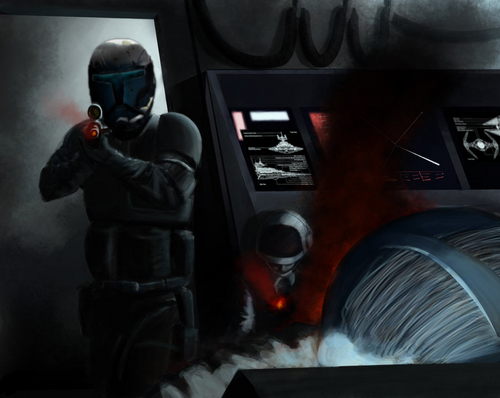 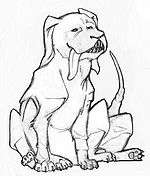 Drawing of Tracyn, by Grent

Traycn has been with Grent for a long time, and goes with him everywhere. On the Paragon, Tracyn's presence is tolerated, though Grent has been warned that if the strill misbehaves in anyway, it will be confined to quarters as a minimum.

Tracyn has been on training exercises with Grent before, and even a couple of covert missions, but, due to the size capacity of the cockpit of a TIE Hunter, the strill is unable to participate in any current afairs. As such, when Grent leaves the hangar, the strill can be found in the Strill SCO's office, waiting for his return.

R2-G7 is a recent addition to Grent's slowly growing family. Originally, the R2 unit was bought by Grent to assist in his new slicing pursuits. As such, Grent had planned to wipe the droid's memory to prevent the 'tin can' from spilling the beans. However, the droid impressed Grent so much in a trial run of his slicing abilities, that Grent made the conscious decision to not wipe R2-G7's memory, so as to allow him to learn.

The Paragon welcomes G7 more than she does Tracyn, mainly due to the fact that droids don't slobber everywhere, smell really badly to the male population, or try to bite the hand off anyone that tries to stroke it.

HK-52 is a HK series combat and assassin droid, built from parts found and bought by Gur and one of his flight members. H, as he known as, masquerades as a protocol and bodyguard droid for Grent. In truth, his assassination protocols have simply been made secondary.