"You are all here, because the Navy has rejected you. Each of you has received black marks in your records more than once. The line is back there, and we all crossed it. This is your last chance. You are all here, because your records indicate you are not the alpha dogs, but the ones they look up to. We are the five eight squadron, we fight when called; on land, in space, and in the air. We must all rise to the call... above and beyond."
–Former Squadron Commanding Officer, Joamer Tremaine Reistlin, upon greeting the first batch of test subjects.

SQUADRON NO LONGER IN ACTIVE SERVICE. THIS FILE HAD BEEN LEFT FOR ARCHIVE PURPOSES[edit]

The name was chosen as a way to describe the squadron, without going into major detail that may compromise the way they worked as a unit. The Mandalorian Strill, is a highly intelligent, naturally ferocious predator. Attacking in secret and out of the darkness, they glide in on leathery wings to make their kills.

Alone or in groups, they are deadly efficient killers. Trained in a variety of fighting techniques, from advanced flying to hand-to-hand combat, Strill Squadron is known for flying solo into tense situations, or, when the need calls for it, flying together in what bystanders have called a "sight unseen since before the Clone Wars, grace and beauty hold nothing on them".

The squadron is highly reminiscent of the New Republic's Wraith Squadron. In fact, many of the techniques used by Strill have been adapted from what few holos remain with Wraith missions recorded on them. 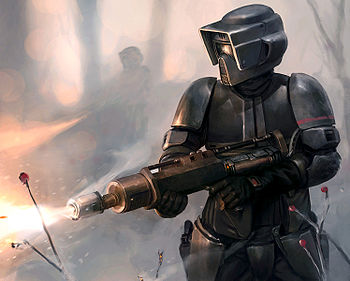 Created as a prototype, the Vast Empire's Naval High Command wanted to test a theory whether a group of pilots could land their fighters, pull off an objective, and still be capable of dog fighting when the day was done. To bring about this task, a retired army squad leader was called in to design the squadron. Already having experience in a cockpit, they thought this would be a simple task for him.

Their first mission (Counterpunch: War) did not go exactly according to plan. While it was not a failure outright, it proved a squadron of this type could not be built in only a few days time. During their second mission (Counterpunch: Death) they would instead operate as a normal fighter squadron to reinforce the idea they were pilots first, and commandos second. However, some of the pilots did fight on the ground briefly.

The most recent mission, however, that Strill took part in (Chapter 9 Prelude: Navy) during the Battle of Absit, saw one of the flights board a stationary Venator-class ship that had been infiltrated by Corellian agents. The flight secured a hangar for incoming Imperial Marines, and, despite suffering a betrayal from one of their number, managed to shut down activated turrets that threatened to shoot down the Marine shuttles, thus showing Naval High Command that their theory could be done. The leader of the flight, who was also the then Squadron Executive Officer, was promoted to Squadron Commanding Officer in an effort to continue the squadron's performance.

After the disastrous events that ended the mission known as Counterpunch: Pestilence that saw the Interceptor squadron Tuk’ata close due to half of their members being killed, a new way of thinking came down from Naval High Command. One of these new ideas would be a half pilot, half commando squadron, capable of superior dog fighting techniques in the air, and having the ability to take out targets on the ground without the need for major ground support.

Their first mission, at the Battle of Bloodmoon, was ultimately classified as a failure. Few air kills were recorded, and even less ground kills. Most of their main goals were not accomplished (i.e. taking over an ion canon), and their secondary goals were not even touched. However it proved to their leader exactly what needed to be shown. A squadron like this could not be built inside a week. The idea itself did work, however: they succeeded in having only two deaths, and did manage to stop an ion cannon that was meant to cause massive damage to the Adjudicator.

The second mission, codenamed Counterpunch: Death, was a fairly simplistic mission. Naval High Command ordered Strill to perform duties as pilots, instead of commandos. Some saw this as a punishment for their previous failure, and whilst they were not far wrong in their assumptions, the mission was actually a test that allowed the high-ups to observe Strill's flying. The squadron performed admirably, and as such, in the Battle of Absit, Strill were given special assignment to secure a different part of the shipyards to the rest of the fleet. In the aftermath, both Naval High Command and the Vast Empire High Command commended Strill's pilots on their actions in preventing the Corellians from securing a formidable Venator-class cruiser. 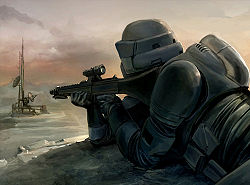 Strill are currently en-route to Lotaith, where, unbeknown to them, the squadron will be disbanded and its members sent to other squadrons. 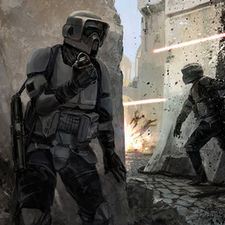 Storm Command Armour. Moderate to heavy modification done from years of experience by their Squadron XO, Joamer. Armour plating was reduced and a better alloy used. Damage resistance was reduced by a small amount. Armour was made lighter and easier to wear during extended flights in a fighter. Self contained closed circuit life-support system was installed, and with standard oxygen canisters, the wearer can operate for ten hours at rest without recharge. For extended operation, different canisters can be used.

Body suit was replaced with a thicker and more atmospheric resistant type, such as those used in the Katarn Commando Armour. This allows the wearer to survive in the near vacuum like atmosphere of a non-modified TIE cockpit.

The non-standard operation of the squadron has created a mostly individualized approach to what weapons are brought on a mission. Due to the nature of the TIE cockpit, and limited space weapons are often either compact or capable of being stored in pieces.

When they were first activated they used the Vast Empire's TIE Interceptor, with no major modifications done to help the squadron. Now, however, they use TIE Hunters as their standard craft, still with no announced modifications.

Name and Callsign: Grent “Gurlanin” Notimo
Appearance: Human, Male, 5’9”, brown eyes, One clawed scar running over right eye, military cut dark brown hair, well trimmed short box beard, muscular.
Personality: Gurlanin is the kind of man to have only a few close friends. He often beats his competition, the aftermath making him seem cocky and arrogant. His social skills are similarly awkward due to Autism. He respects those that respect him, and is fiercely loyal when he needs to be.


Name and Callsign: Nadya “Lady” Mcintyre (NPC)
Appearance: human, female, partially shaved black hair, green eyes, tattoos on both arms
Personality: Though born a female, Nadya masquerades as a male. She has conversations with the guys and respects the guys more than women. However, this isn’t to say that she doesn’t get along with the other females around her. As a whole Nadya is a bit brash, always speaking her mind even if not appropriate, and having quite dark humour. Calling her “cute” could get you a punch to the face.


Name and Callsign: Tycho 'Ghastly' Avan
Appearance: Human, male, bald, pale blue eyes, mass of scars on head one bisecting nose, 5' 11", muscular
Personality: Cold at first, if you become friends he is good natured and agreeable and is always willing to fly. When left to his own devices, he often reads or plays holochess


Name and Callsign: Fallon “Edge” Mirinis (NPC)
Appearance: human, male, short black hair and facial hair, brown eyes, medium build
Personality: Edge is jaded and hard. However, he has a soft side for those considered the underdogs. He also like a laugh one he's comfortable around people.

Name and Callsign: Joamer Reistlin
Appearance: human, male, 6’0”, shoulder length black hair, blue eyes, both arms cybernetic, one tattoo on inside of right wrist and one on right chest
Personality: Seems cocky and arrogant at first glance, but those that know him know he draws upon a deep reservoir of knowledge and experience having been born many years before the Clone Wars.


Name and Callsign: Yvaine “Starlight” Thorne (NPC)
Appearance: Twi’lek, female, light purple skin, blue eyes
Personality: Yvaine is elegant and reserved. She doesn’t speak unless she feels it is absolutely necessary. Her line of work keeps her calm in even the most dangerous of situations.