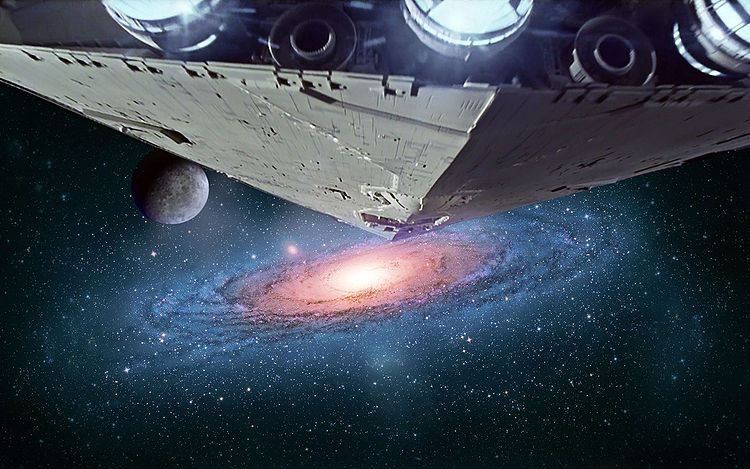 At the end of the club history designated Chapter 8.5, our forces had helped discover a conspiracy between Thrawnist Imperial forces and non-human elements of the New Republic. In return for not attacking his forces, Grand Admiral Thrawn handed over Imperial intelligence that revealed the known existence of shipyards and other facilities that the non-human Republic forces had been keeping secret. To protect their resources, an informal non-aggression pact was created.

The Battle of Hast was a Vast Empire attack not sanctioned by the Empire but did sow the seeds of distrust between the two factions. Not to mention how Thrawn was received by other Imperial factions, or how the Human elements of the New Republic felt. Our intelligence found the facility without an assist from Thrawn's faction, yet this was not believed by Thrawn's New Republic "allies". The rift was created, the revelation of a secret pact was made known and just a bit more chaos and disorder was added to an already volatile mix.

Divisions within both the Empire and New Republic only increased. Gone were the concerns over puppet warlords and bitter Rebels with private fleets. They remained, of course, but more deadly issues emerged. The move towards species-driven attacks threatened to divide the whole galaxy.

Director Ysanne Isard initiated the problem with the release of the Krytos Virus, which she used as cover for her decamping her forces from Coruscant. Instead of sitting back in horror at targeting species for death, many on both sides thought it a grand notion. Thus, while the major combatants spent time on the so-called Bacta War, the seeds of the series of plague attacks now called the Plague Wars were planted.

For a few years, the Core Worlds descended into chaos, as tens of billions died from infection and many, many more succumbed to the anarchy and neglect created in the midst of an absence of order and civilization. Many an infected ship was towed into the nearest solar object rather then deal with the sick, or just another load of uninfected refugees in some cases. Many more died as convoys from the agriworlds just stopped heading Coreward as the violence extended towards the Rim worlds.

The Vast Empire was among the few regions that generally prospered from the Plague Wars. Not a target of disease, but a recipient of over a billion refugees, our population exploded, as did our holdings as many worlds opted to come under the protection of a stable and strong Imperial faction. Money, resources, and - most importantly - food were hard to come by for quite a few seasons, but given the state of the Core, this was a small blessing.

Order has been restored across the galaxy. The wealth and innocence of the brighter lights in the galaxy are no more, at least for the next generation or so. Trust in an ally is an illusion few maintain.

Given the might and numbers suddenly granted our faction, it has been decided to make the most of it and make a push to the Core. Our reputation for strength and steadfastness is now well known among those who have dealt with us, both as friends, adversaries, and as needy refugee in search of a home and a job.

One of the major regions of refugee influx were the worlds of the Corellian Sector. Divided against loyalty to the Empire, support for the Rebellion nee New Republic, or a fierce independent streak; Corellians and their neighbors the Selonians, Drall, and Duros were constantly trying to make a unified stand. During the Plague Wars, the Imperialists won, exiling millions, rounding up those who opposed them and sending them to the stars to mingle with those driven off their own homeworlds for reasons more dire than being on the wrong side of a political fight.

To be sure, the Corellians worlds did suffer from the plagues, and many refugees were cast amongst the stars out of genuine panic and in need of support. For all factions taking in refugees, however, the Corellians were a handful to be sure. Gifted workers, many with skills sorely needed and willing to pitch in and contribute to their new societies, but many with a desire for vengeance.

For those taken in by the Vast Empire, this burning need for retribution was just as strong. With some much to contribute, it was hard to ship off the worst offenders, but many an exchange was done with New Republic worlds, taking in Imperialists on the wrong side of the current rulers of Coronet and sending off those more Republican-minded. Even so, having Corellians who agreed with you only meant they just screamed at you instead of mining the water works.

In time, all it took was a plausible reason to head together on the same vector. The Empire needed to reclaim territory. The Vast Empire wanted a path to the Core Worlds. The Corellians wanted to go home at the helm of an insurgent fleet. The Corellians just needed to do one dumb thing to make it all come together.

As most situations like this begin, it was all an innocent mistake. In 10 ABY, enroute to Corellian space, a convoy of Vast Empire freighters and transports was interdicted by a Corellian Security Forces patrol. Of the thousands of crewers aboard the ship, three were on the ban list created by the Corellian authorities. Each were refugees that had not been exiled from the Sector for political reasons and had been added after the fact. The three - Evdokia Slaughter, Warzyniec Wood, and Dezola Sunozi (a Bovorian, Corellian, and a Drall) were summarily executed at the scene. The rest of the convoy, raw materials being sent to Corellian factories and supplies for Core relief efforts, were impounded as were the crews.

In the months that followed, a few crewers were "interrogated" and died, others imprisoned on trumped up charges. Eventually, all but forty were released. The ships and cargo were kept by the Corellians. Slaughter, Wood, and Sunozi were the impetus for dozens of anti-Corellian protest groups created on Vast Empire refugee worlds. You did not have to be from a Corellian world to feel the hatred against the Core and the events of recent years. Protestors turned to armed gangs turned to irregular militas to privateers. In time, a flight of privateer starfighters got the jump on a CorSec patrol, destroying a light frigate and its escorts. A key passenger on the frigate was a major advisor to Governor-General Micamberlecto. The new rule had recently been installed as the Sector had changed alliances, and the New Republic was eager to support their important ally against a violent threat. While seemingly an accident, it created the casus belli for conflict between the New Republic forces nominally defending Corellian space and the Vast Empire. Trade between the Corellian worlds and the Vast Empire, dangerous since the Plague Wars, was effectively dead. Imperial patrols supporting the Treaty of Vinsoth lines were attacked by newly created ships and fighters of an updated and expanded CorSec fleet.

The internal pressures of the refugee community, the instability of Corellian leadership, and the desire to avenge aggression and expand territory all came together at one time and one place. The Vast Empire would mobilize and take the fight to Corellia.

Even a weakened Corellian Sector, one who has antagonized the Empire and offended half the New Republic, is a daunting foe. To take on such an adversary requires probing their defenses, preparing to counter their own moves, and shaking down new ships, new crews, and new troopers. Our initial moves will be calculated, shakedown tests both manageable and advantageous to our goals.

Keeping in mind that Corellia has a formidable military history of its own, it also has loyal forces that came over when the Corellians severed ties with the Empire. It also has a New Republic task force that is there both to keep tenuous relations open and to key a wary eye on the Sector. While tense, these forces train, patrol, and work very well alongside each other. There is no reason to expect any of these units, their leaders, or the regional forces that traditionally look to Corellia for leadership and protection to break ranks. They are invested in the continued survival of the existing regime and *will* fight hard to protect it.